Of course, you can’t use “Perform Script on Server” (PSoS) if you don’t have the following three conditions present:

While working on our second FileMaker module, fmRecentRecords, we perfected a neat scripting trick for automatically running a script on a server, whenever possible. The specific code is shown below, but it basically works this way:

First, the script needs to determine if the file is actually hosted (using Get (ConnectionState) ). Next, it needs to determine what version of FileMaker Server is hosting the file (using Get (HostApplicationVersion) ), and if that version is one that can handle PSoS (using PatternCount to look for the version numbers we require: 13 or 14). Once it’s determined that the file is hosted by a version of FileMaker Server that can use PSoS, the script needs to know whether it is itself currently running on the local machine. If it is, then the script will recursevely call itself again using PSoS.

Now the next time it runs (on the server), it will skip to the actual steps of the script we want to perform. If the file is not hosted, or is not hosted by a version 13 or higher server, then it will also skip the steps to call itself via PSoS, and the script just runs the rest of the procedure locally.

The beauty of this is that you can use PSoS when it’s available, but still run just fine when it’s not. Check out the code below: 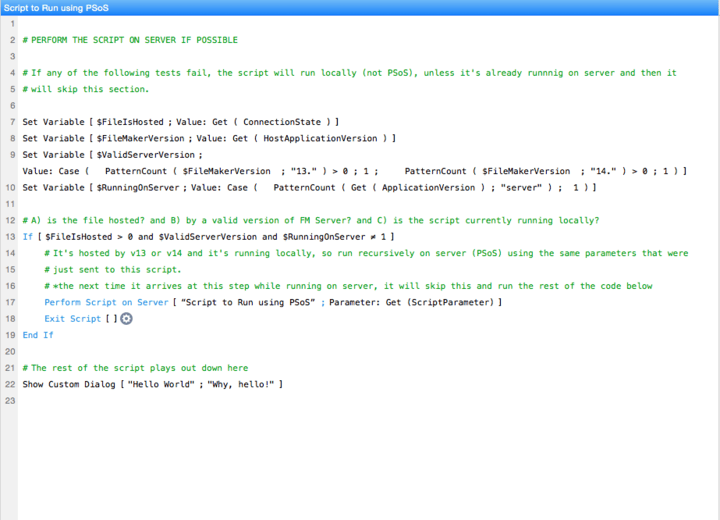 Just insert some code like this into your script and you’re off and running… on server!

Lastly, this technique can still fail if the server is too busy, so I always trap for an error immediately after the attempt. Thus I am left with:

Marc, it’s funny, but I just in the last few days rewrote this as a custom function myself. I was sort of getting annoyed at the verbosity of all those the steps at the head of a script. My custom function looks like this:

But now I realize, as you suggested, that I could remove the “isHosted” parameter entirely.

I didn’t think about the possibility of an 812 error, so that’s a great suggestion!