One of the new features in FileMaker 16 is the ability to set an external data source dynamically by using a variable.

It provides the ability to have multiple customers share a user interface file but each have their own data files.

In previous versions of FileMaker, external data sources were fixed, so each user had to have their own set of files, or record level security had to be used to block access to other user’s records in one data file.

Record level security can really bog down a system, so separate data files have serious performance benefits. However, if each customer has their own file and there are thirty customers, a small UI change meant that you would have to replace thirty different files.

In FileMaker 16, we can have as single UI file that all users login into. The file will look at who is logging in, dynamically set the data file name in a variable accordingly, and make sure they only connect to their data. A small UI update can be achieved by replacing a single file not the server. 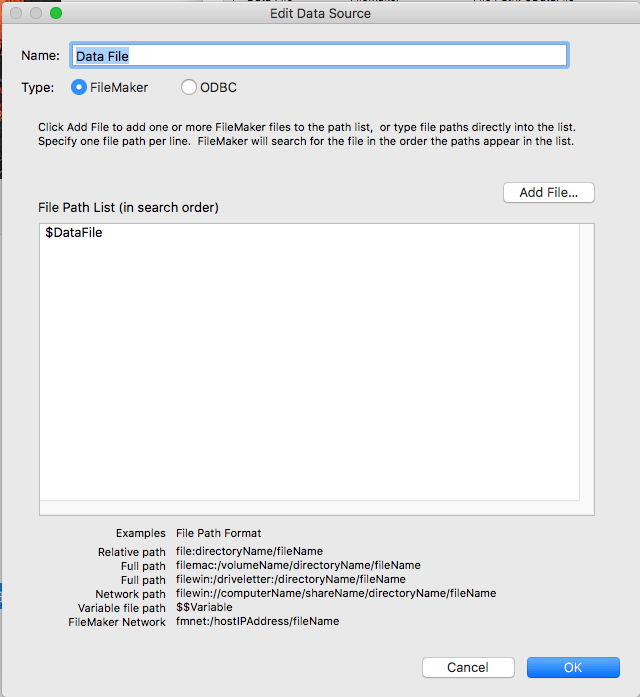 The UI file will not attempt to open the data file until it “needs” it, whether it is because there is a reference to it in a script that is called, or a field from the data source on a layout. Once that happens, the UI file will “resolve” the relationship and connect.  If this is defined as a variable, the variable needs to be defined before the external data source can be accessed. This means the variable will most likely be defined in a startup script which the purposely accesses the data file to make sure that relationship is resolved correctly.

While this new feature has remarkable potential to simplify UI development on vertical market solutions, there are some issues that will have to be addressed. All of the ones that come to mind revolve around security.

Another issue is the “Re-Login” script step.  Once the connection is made to the data file, it will be fixed until both the UI and Data file are closed and reopened. This means if a user uses re-login to log in as a user who does not have access to the file they are going to remain connected to a file they no longer have access to. Also, what if a user needs access to all of the data files? Letting them pick on login might be an option, but having to close the whole system and start it back up to switch data could become cumbersome for someone managing several customers on a vertical market solution.

I am attempting to use a variable (global) for the file path of an external data source for the first time. I have tried everything I can think of to get the file to change data file but my UI file constantly links to the original file. The global variable changes as expected but the original file opens and I can’t understand why. Any ideas why this is happening?

In the File Options, do you have the “Switch to layout” box checked? And do you have a layout specified that does not use a table occurrence group with any references to the external data file?

The variable must be set before the relationship between the UI and data files is resolved. If the system opens to a layout that is in a table occurrence group that references the external data source the relationship will be resolved at that point, even before any script set to the on first window open trigger.

Guys is there any chance to change the file without re-login or restart the file? I get the idea to use initial layout without any table occurance connection to external data but still it is require a re-login 🙂

There doesn’t appear to be any way to change which file an external data source is pointing at without closing both the UI and data files.

Furthermore, once the path to an external data file is resolved and the data file is open, there doesn’t appear to be any way to close the data file and open another one as long as the UI file has any table occurrences from the data file. The “close file” command only seems to hide other open files.

I love the use of this for vertical solutions. But doesn’t this go against Filemakers new guidelines regarding having multiple companies data files on the same instance of Filemaker Server?

Actually, this use case is for a vertical solution, which is specifically permitted by FileMaker’s SBA (Solution Bundle Agreement) licensing. In other words, you are allowed to have multiple customer data files if you have an SBA licensed server.

Another use case that wouldn’t require any special licensing is if you have one interface file connecting dynamically to data files for the same customer. AppWorks has a customer using just this model, where they have two offices that share the interface, but not data.

Thank you for your article. I have 1 question. Is that possible to create relationship between UI file and the data source file. That means i create 1 relationship for all external data sources by changing the value of global variable?

Thank you. If i am going to use webdirect(control file), webdirect(UI file),
A,B,C….datasource file. Is that possible?

Actually, I’m not sure if it would be possible with Webdirect, since you need to be able to close files via script step, and the ‘Close File’ script step is not supported on Webdirect. You can certainly connect to a variable data source on Webdirect, though, so there may be a way to get it to work. Maybe some clever use of the ‘Select Window’ step?

@Sam – yes it works on WebDirect for me – finally!
Note that you can’t just use ?$var= on it’s own in your url, you must also call a script that it is in like this ?script=&$var (can also use ?script=&param).
That also means you can’t run a triggered ‘on open’ script in file options because that somehow kills your $var too.

@Thomas thank you for this helpful article. After hitting my head against a brick wall for what seemed an eternity, this line made all the difference..

“The last line of of the script above goes to a layout based on the data source, forcing the relationship to be resolved while the script is still running and the variable still exists.”

I had thought that just setting the variable $DataSource was enough, but I then called another script to go to a layout that would use the data source, so my $var lost it’s scope when I called the new script, so no data source.

This is a great improvement for FMP16 but can be quite tricky as the documentation is limited.

Subscribe to the AppWorks Newsletter
Be the first to learn about FileMaker updates and more! We promise not to overwhelm your inbox.
Your information will *never* be shared or sold to a 3rd party.